The Hydrotherapy Elixir and the Evolution of Jacuzzi®

It is a symbol of therapeutic relaxation, of solitary rejuvenation, or backyard socialization.  It is known as a spa, hot tub, whirlpool, and universally, as a Jacuzzi®.  In fact, the Jacuzzi® brand is so widely recognized that it has earned a place in the Merriam-Webster dictionary, which defines a Jacuzzi® as “a bathtub in which a pump causes water and air bubbles to move around your body.”

Watch this inspirational story of the world-famous Jacuzzi® Hot Tub brand filmed in our Imagine Backyard Living showroom. Ken Jacuzzi® is an incredible man and we were honored to host him for this special day.

While humans have recognized the restorative, cleansing effects of hydrotherapy for thousands of years via natural hot springs and bathhouses, Jacuzzi® pioneered the modern incarnation in the 1950s.  However, the Jacuzzi® family’s legacy of innovation extends back to the early 1900s, when seven brothers emigrated to the U.S. from Italy.  They were initially active in the nascent aviation industry, to which their major contribution was the development of the world’s first enclosed-cabin monoplane.  The brothers later saw opportunity in the orange groves of California, where they focused on the water systems and pumps that irrigated the land.  In 1925, their creation of the first submersible pump revolutionized the agricultural industry.

The road to establishing Jacuzzi® as the household name that it is today began in the 1950s when adversity struck the family and parental determination gave way to ground-breaking innovation.  Kenneth Jacuzzi®, the son of the family’s youngest brother, Candido, contracted strep throat when he was 3 years old. The poor antibiotics of the day, it led to juvenile rheumatoid arthritis, an autoimmune condition that causes debilitating joint pain and may result in permanent disability.  Visits to a communal jetted tub at the hospital relieved Kenneth’s pain, but the exposure to other patients frequently caused him to contract illnesses. Intent on finding a hydrotherapy solution that would assuage Kenneth’s symptoms at home, Candido conferred with his ingenious brothers.  The men applied their knowledge of hydraulics to design the J-300, a portable aerating pump that could transform an ordinary home bathtub into a relaxing, healing experience.  The development rapidly gained popularity among consumers, who found that the therapeutic benefits of the J-300 were not limited to those suffering from painful conditions.
In 1968, the modern whirlpool tub that the world associates with the Jacuzzi® name burst onto the market, creating a whole new industry.  Roy Jacuzzi®, a third-generation family member who had worked in the business since he was a teenager, incorporated therapeutic jets into the sides of a tub.  Marketed as the “Roman,” the result was the world’s first integrated whirlpool bath.  The jets emitted an innovative ratio of 50 percent air to 50 percent water.  Jacuzzi® still applies this ratio today to create the uniquely invigorating experience for which its tubs are known.
As the years passed, Jacuzzi® continued to modify its products in response to evolving consumer trends.  The company added heating and filtration systems to its tubs and developed larger hit tubs to accommodate multiple bathers.  Today, Jacuzzi® offers customers around the world hot tubs in multiple colors and with a wide array of optional features, including ultra violet water purification systems, waterfalls, stereos, and energy-efficient systems.  A classic symbol of ingenuity, Jacuzzi® Brands currently holds over 250 patents and continues to lead the industry in quality, value, design and innovation as it prepares to celebrate its 60th anniversary in 2016.
Located in Scottsdale, Imagine Backyard Living is the largest Jacuzzi® dealer in the state of Arizona and the largest single store Jacuzzi® dealer in the world.  As part of its commitment to transforming backyard spaces into relaxing havens, Imagine Backyard Living features a wide selection of Jacuzzi® products, ranging from small personal size tubs to those that accommodate up to nine adults.  Visit our showroom to learn more about bringing the unique Jacuzzi® experience to your backyard.
(Sources: http://www.jacuzzi.com/hot-tubs/about/, http://en.jacuzzi.eu/jacuzzi-world/history, https://www.youtube.com/watch?v=jNG-0M9Iscc, http://www.jacuzzi.com/hot-tubs/wp-content/uploads/2012/02/2007-History-Brochure.pdf, http://www.merriam-webster.com/dictionary/jacuzzi). 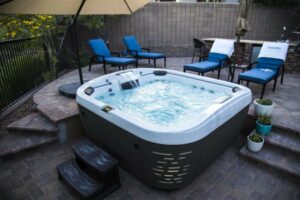 Buying a Hot Tub From a Home Show – Good or Bad Idea? 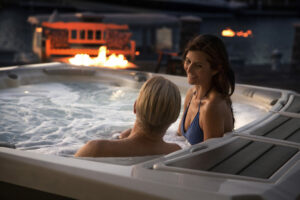 Hot Tub Hydrotherapy – Everything You Need To Know 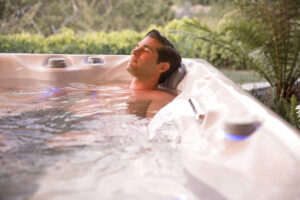 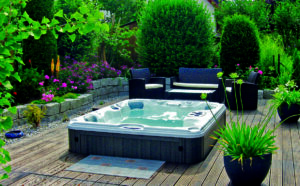 How To Create Your Dream Backyard On a Budget

© 2023 Imagine Backyard Living All rights reserved. Made with by IMP Digital